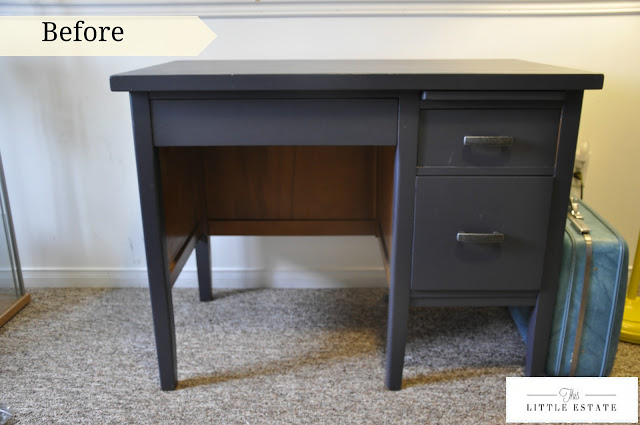 It had already been rescued from its previous life as an ugly golden desk.
Fake gold coloured desk.
Not the real stuff that adorns the heads of kings and queens of yonder year, but the fake coloured gold that shames furniture.
The boring blue desk lived tucked away in a boring room and dreamt of a life filled with more excitement.
It sinfully envied its fellow furniture inhabitants that had been given favour with colorful coats. It looked longingly at the Blue Entry Way Dresser and wished it too could be a show stopper. It dreamed of getting more attention and authority like the Time Out Chair.
And then one day, after lots of boring days living far away in the bedroom with a messy boy, something amazing happened. In walked The Little Estate master, with red paint, frog tape and a determined look in her eyes. She was armed with a magical paint brush and the little blue desk knew immediatly that someone else had seen its hidden potential. With a twirl of some tape and a swish of that magic paint brush, the boring desk had renewed hope of living a new colourful life… And it proudly wore its new red shoes! Infact, the not-so-boring-little-blue-desk was reminded of another character who proudly wore little red shoes, and remembered the words that character spoke with love and conviction.

The not-so-boring-little-blue-desk agreed,
“There IS no place like home”….

A Smoothie Corner. {Shopping our home and waiting for Spring}